“We’re landing. Get out here.” Jack found land. His group all went: “We thought there wasn’t any land!” “I thought too. So you better look now or you’ll never believe me.” “Land? Oh! There’s a village!” Ducky came in. “We’re landing. Be careful.” CRASH! “I think there’s someone around here…” A rare, rare, rare hybrid Mobian was crying. “Are you all right? You better get up.” “I’m Dayne, a Firefox.” “I can help you. Come with me.”

“Do you have a brother?”

“One. I really don’t know where he is. His name is Devan. He’s an unknown species…”

“You will not speak to me. Where is Jack?”

“You’ll get what you want, and, you are Devablaster? Childish.”

“I prefer being called that. Ow!”

“That’s right. I slashed you.”

“No! You did this destruction? I’m going with Jack!”

“Very well. I’ll leave the final fight for another time.”

Ducky, Maxine, and Rory were called down. Devablaster left some of his minions. Rory had a talent for wrestling, and took down the weakest. Maxine had to use her iceblades.

Dayne had been using flame axes, a axe in the design of a fox. Ducky had to call Kat up, along with Rory.

Jack finished them off. “Sorry for you.”

They went back to the ship.

“I used Ultimate Chaos Control.” A monkey koala hybrid asked him where the hedgehog’s current adventure began. “My girl, my friend- gone. The world was being destroyed. They had to be safe, from where we came from.” A flame like image of a hedgehog appeared in Jack’s hand. ” I took my belongings- a hook shot, a gun, my sword, some shoes, and armor. I found a ship, a flying boat, the one we’re in, and hi jacked it.” A unicorn cat hybrid then asked, “Who’d you meet first?” “Ducky here. On my ship, I scanned Mobius of gifted children. I picked up Ducky, and had a conversation with him. I said I created him. Didn’t take it well. I had to finally convince him. I knew everything about him, so he finally came with me.”

“Yep. He knew my darkest secret- I’m not telling you.” Ducky added in.

“I found this stutterer- Maxine. She has powers of ice, I tell you. Had to take her in. I then found Rory, a tiger, who has brain that you couldn’t comprehend. Later I found Kat, a unicat.”

“Thanks. My story- I was an outcast- and so happened to be at the top of a mountain. I had my workshop there, and sent an intercom to Jack, warning him about fog. He went down and landed. I’m a mechanic, here to help you.” Kat said.

Jack thought, “Heh. That’s why I chose him.”

“You can go and eat dinner now.” Jack announced.

Jack saw a ship in the distance. He quickly got his claw shot, and landed on deck. “Anyone here?” Volcano minions came. “Hail Devablaster…” “No.” He didn’t think, slashed and destroyed all of those minions. “You dare?” He got his claw shot again and went over to the ship.

“My team better survive this world… Of cruelty- and nothing.

This is a nice gift I got yesterday from a friend. It’s very convenient, I can doodle on to it. It has little sticky notes, medium, and large ones. This kind of thing would be good if I become famous, so if I’m giving autographs, and someone wants one, but doesn’t have anything for me to sign, I could pull something like this out and give them a big sticky note. 10/10

Hey there! Here’s a little treat for you! If you want to play this, search ‘atari breakout’ on GOOGLE, not Bing, and go to Images.

If you are a Mega Bloks Skylanders fan like me, this is a nice little treat. I got it a few days ago. It has a portal that can slide and bash the bumper. The Ice Imp is good for collectors, and Hot Dog is awesome.
10/10

This is not from San Diego. I have gotten this awhile back. It is from a blind bag, but I got it without the bag. I wanted the pig. This is the first Minecraft pig plastic toy/ action figure. It is supposed to be a hanger, however, I stressed the plastic half loop, and it’s not there anymore. (I wanted it to be a action figure) its legs move, and its head.

This is another souvenir I got at San Diego. It speaks for itself. Just a stone made into a die.

When I was in Old Town in San Diego, I saw an artist, a local artist, painting these by hand. Actually, finger. He did custom ones on the spot for people, but I bought one that he already made. It’s on glass, and if you see it when you hold it up to the sun, certain spots glow. This was like a once in a lifetime chance. I’m not sure he has a website, and, I’m probably not going to San Diego again for a long time. This is a nice piece of art. He has been doing art for many years. I recently found out his name, Miguel Lopez Tula. If you visit San Diego soon, check out Old Town, and he should be there for awhile.

This is a hippo carving (out of soapstone) from Africa. I went to San Diego last week, and I went to Balboa Park. There’s this little gift shop near the International Houses, and it’s similar to the World Market. It mainly had stuff there. My mom isn’t a big fan of gift shops, but she said this one was worth a visit. I have a soapstone heart, which is why I wanted this. This is hand made. It’s really neat, staying in scale (almost) with some of my other things. It has a flower design, and is turquoise. I was going to get green, but, turquoise is prettier. It’s a nice little shelf thing, too. I give it a 10 outa 10. 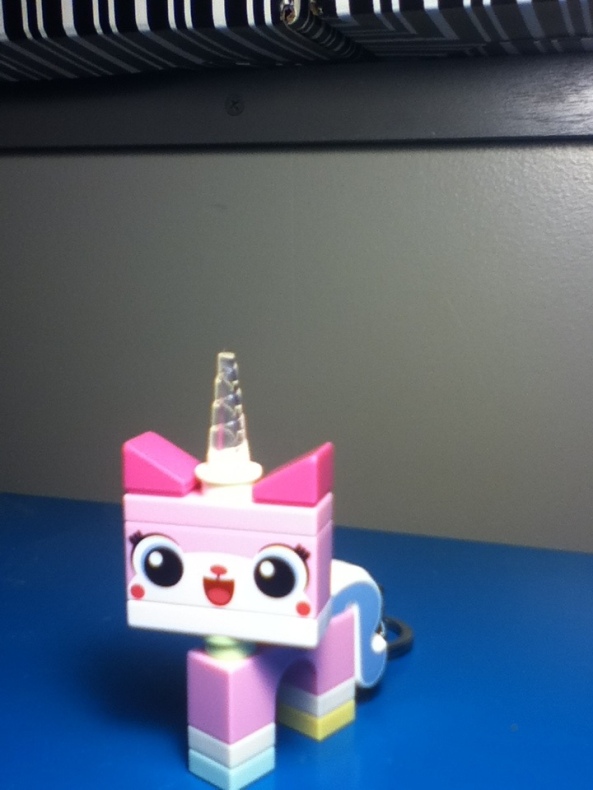 I’m doing a chain of reviews today. I ordered this after legoland, because I didn’t get anything there. It was supposed to come on this Tuesday, however it came earlier, so I’m doing reviews of things I missed.

This Unikitty is awesome. It’s a keychain flashlight, but I don’t wanna use it as a keychain, as many cool keychains get lost. Also, a lot of them are better as toys. The horn lights up, and it’s very bright. You touch the face (the middle) and it lights up. There’s no button, it has a heat sensor, which is neat. It’s head swivels. Please note: this won’t stick on Lego, and it doesn’t come apart. I’m fine with it, though. Very accurate, and that makes it cool. (Cute!) Unikitty was a great character in The Lego Movie. It was the best movie I’ve seen in a long time, plus, on rotten tomatoes, 96% of critics liked it (more than Frozen) and 92% of regular people liked it. That’s a record. For a movie like that, you’d think not so great. I really like this, so, I’m giving it a 10 out of 10.